Bullet point 1 - Definitions, measures and examples of obsessions and compulsions

﻿OCD occurs in approx 2% of the population and in men and women in equal numbers. The age of onset is usually adolescence or early adulthood, but is can also begin in childhood.

Common obsessive thoughts concern contamination, e.g. germs. The obsession occurs automatically and is unwanted and disturbing to the individual. The thoughts and images are not just normal anxieties, but excessive worries that are usually unrelated to real-life problems. What might a compulsion be for someone who has obsessive thoughts about germs?

If a person is prevented from performing the compulsion, feelings of dread and panic occur. People with obsessive-compulsive disorder also feel that they should resist the compulsion, but are unable to do so. Attempts are made to resist, but end in feelings of defeat and failure when the person gives in.﻿

You should be able to guess a lot of this explanation already! You know how the cognitive approach works by this stage...

﻿As we have seen, researchers have learned that certain antidepressant drugs are very useful in the treatment of OCD. For example, the anti-depressant paroxetine was used by Gilbert et al (2000), who found improvements in their patients afterwards.

Paroxetine is an SSRI, leading to an increase in serotonin levels. You know how these drugs work from the Abnormal Affect page, so you should be able to describe the action of the drug in some detail. Not only do these SSRIs increase brain serotonin activity; they also produce more normal activity in the orbital region and caudate nuclei, the brain areas that are implicated in the disorder (Baxter et al., 2001). ﻿ 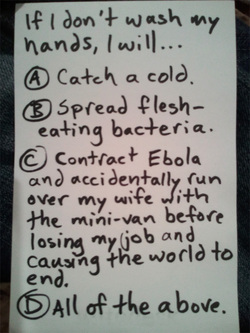 Classic catastrophic thinking...
﻿This therapy attempts to change the conscious thought processes. There are two initial steps involved.
﻿Once these 2 steps have been achieved, the therapist moves on to helping the person change their distorted cognitive ﻿processes﻿. The most important aspect here is to stop the person from catastrophising. The approach attempts to either remove the obsessive thoughts or get the person to think about them in a different way.

Both approaches are done to help the person stop performing the compulsive behaviours. An additional techniques used in cognitive therapy is habituation training (Franklin et al 2000). Here the client is asked to think repeatedly about their obsessive thoughts. The idea is that by deliberately thinking about obsessions, they will become less anxiety raising, with the consequence that compulsive behaviour is not required to reduce high levels of anxiety.
Research has shown that cognitive therapy is successful in reducing the frequency with which people have obsessive thoughts. It has also seems to be effective in reducing both the frequency and the duration of compulsive behaviours (Rufer et al 2005).

For people who experience obsessions only, habituation training is often the entire plan of treatment (Rachman and Hodgson, 1989). For others, however, therapists may add covert – response prevention: they teach clients to prevent or distract themselves from carrying out compulsive actions that may occur during habituation training.﻿ 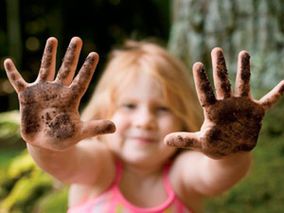 Exposed to something which would normally trigger the compulsion, patients are then prevented from performing their rituals...
Cognitive treatment like those given above can often be paired with a more behavioural strategy such as ERP. ERP focuses only on the compulsions, whereas cognitive therapy tends to focus more on the obsessions (so together they are well matched). ERP deliberately exposes clients to objects or situations that cause anxiety and requires the client to resist performing the compulsive behaviour. The role of the therapist is to help the person develop ways in which they can resist performing the compulsive behaviours. A number of steps are usually involved:

ERP has been used in both one-to-one and group therapy sessions. Outside the therapy session, clients are asked to practise exposing themselves to feared situations and refraining from the compulsive behaviour.
Research which has followed by clients after ERP therapy has shown that between 55% and 75% show improvement and that the improvement lasts for 5 or 6 years (Franklin et al 2005).

﻿Evaluating treatments as a whole... weaving the threads together﻿

﻿It can seem daunting to learn all of the details of the different approaches for each different condition. There is a huge amount of information in this unit, so trying to learn it all is a real challenge. My tip is... DON'T! Here are two great ways of reducing the amount that you have to learn... ﻿

(a) Describe what psychologists have discovered about obsessive compulsive disorder. [8]

First read this document, which covers the skills that we want you to learn when approaching these questions. In summary, you need to try to mention a range of information in question a), so try to mention things from all three bullet points in the specification (so here, something from each of the three approaches). For the question b), try to evaluate using issues and debates (same ones as from AS level). On this page, issues such as reductionism, determinism, ethics, data collection methods, scientific-ness, objectivity and other have been mentioned. Use these in your evaluations! Remember to use a PEE format if you find it helpful.

One final point. Make sure you answer the specific question asked! The 2 b) question will always have a little extra requirement in it, where it will ask you to focus your discussion on one specific area or issue. Here is it the Psychodynamic explanation. At least a paragraph should consequently be devoted to discussing this.

Generic mark schemes are given below. Read them carefully before you start writing and make sure your essays fulfill all the requirements. Please submit your essays through the form on the home page.

Section C in your exam always consists of two questions, one 6 mark recall question and one 8 mark application question. There are always two of these types of question, an﻿d you need to choose one.

(a) Describe the biological explanation of obsessive compulsive disorder. [6]

(b) Suggest what drug therapy could be used to help patients suffering from obsessive compulsive disorder. [8]

The first question is a straightforward recall question. This is the longest question you will get which could focus on just a single theory. You need to write about half a page, so a simple revision check is to make sure that you can write half a page of description about every idea/theory/study that is specifically mentioned in the specification.

The second question allows you to be creative. There is no single right answer. All you have to do is give practical and specific ideas for how you might implement the theory you have described in the first question into the scenario they give you. About a page should be a good length.
Here you have to suggest how you would use drugs to treat a patient with OCD. You therefore need to make sure that you are specifically referring to drugs and practices of drug therapy, and justifying your design using real life evidence and examples.