With reference to relevant to research studies, to what extent does genetic inheritance influence behaviour?

﻿Genetic studies will often look at families and twins. This is because we know precisely how what proportion of genes are likely to be shared between people (identical twins will share 100% of their genes, whereas siblings and non-identical twins will share 50%, for example). If one person in a family or twin pair develops a psychological condition, researchers may look at how likely it is for other people in their related group to also develop it. For example, if one person in a pair of twins has schizophrenia, researchers may want to establish the probability that the other twin will also be schizophrenic – this is called the concordance rate.

The picture on the right is taken from a National Geographic feature with fantastic photo portraits of identical twins. View it here.

﻿Intelligence is a topic which never fails to create debate, and the debate about the extent to which it is heritable (passed on in families) or more due to environmental influences has been raging for hundreds of years. Bouchard et al (1990) wanted to determine how much of intelligence can be attributed to genetics and how much to the environment. Their full research paper (which contains results for a number of other variables as well as intelligence can be read here. ﻿

The causes of depression are numerous, and vary a great deal from person to person. However, given that there is a tendency for depression to run in families (using research methods such as family and twin studies as described above), there has long been the suspicion that at least a part of the cause of depression is genetic. Once this question has been answered, of course, the next question is which genes might be responsible? Again, it is highly unlikely that such a complex and varying condition will only have one gene associated with it, but researchers have begun to identify some genes which could play a role in the process. Caspi et al (2003) was one of these studies, looking at the effect of possessing different types (alleles) of the 5-HTT gene.
In the 5-HTT gene, the two alleles which were studied by Caspi were known as the 'long' and 'short' alleles. In the human population, the frequency of the long allele of 5-HTT is about 57% that of the short allele is 43% (OMIM, 2003). These alleles coded for a protein which acts as a serotonin transporter (responsible for taking serotonin back up from the synapse into the neuron). See the picture below for a more detailed explanation. The 'long' allele was thought to lead to the production of a greater number of serotonin transporters, giving greater control over the levels of serotonin in the synapse. 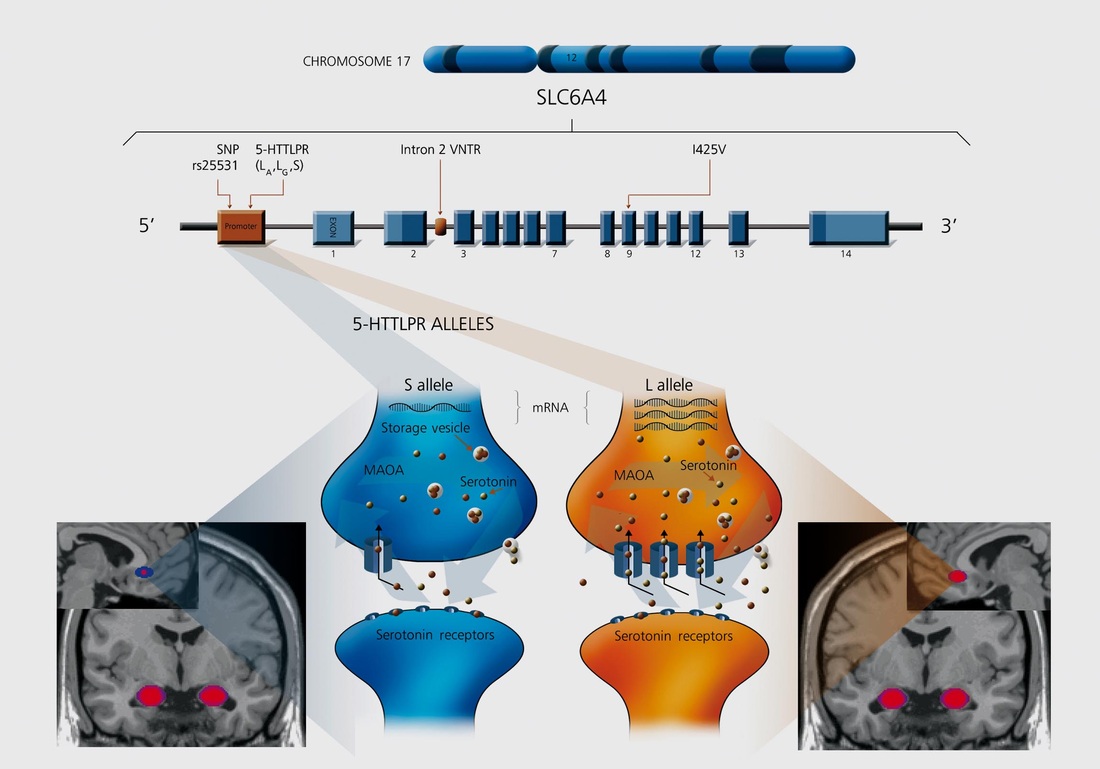 A picture showing the different effects of S and L alleles for serotonin transporters at the synapse. The brain scans also illustrate decreased communication between the amygdala and perigenual anterior cingulate cortex for S allele individuals compared to L allele individuals.

﻿What conclusions can we draw from genetic studies?﻿ 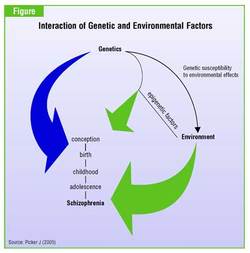 ﻿Clearly genetic studies have the potential to revolutionise our understanding of psychology and who we are. However, we are still at an early stage in this journey, and we must take care to overcome some significant remaining hurdles if we are to be confident in drawing conclusions from these studies. For example...